Dragonflyman is an upbeat hero with a teen sidekick named Stinger. He works with the local police and the local banker to fight crime. His top criminal is the self absorbed Number one.

Dragonfly is a grim anti-hero who is dealing with a lot of emotional baggage, including the brutal murder of his sidekick Stinger at the hands of the vicious psychopath Number One. He operates outside the law, the government and police force are corrupt and as much of a conflict for him as any villain.

One day, in a fight with their respective Number Ones, Dragonflyman and Dragonfly find themselves trapped in each others universes.

Dragonfly/Dragonfly Man are clearly Batman analogs, with Dragonflyman representing the  relentlessly cheery Batman of the 60’s TV show. His world is full of people so honest that they happily dismiss charges against Duece (Number One’s girlfriend) because she stayed with Stinger after he was nearly killed.

Dragonfly, on the other hand, is the Dark and Gritty Batman…and this is where Peyer finds a lot of room for some deep satire of super-hero comics.  As both men try and navigate their way through the other’s world, they find themselves struggling to make sense of it all. How does Dragonfly deal with discovering a world where he is beloved and trusted by authority and citizens? And even more, how does Dragonfly face a world where Stinger is still alive…where his failure of his young charge never occurred? 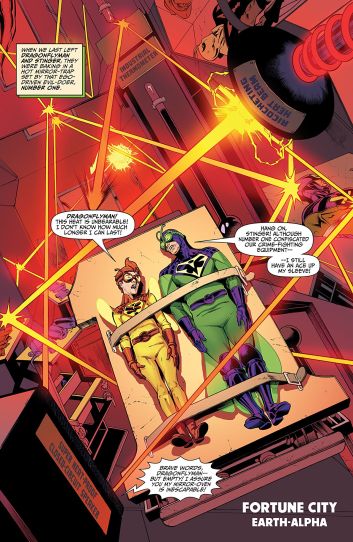 And how is Dragonflyman going to navigate a world where he is seen as the real danger, no more trustworthy than his evil villains? A world without Stinger. Where his friends are corrupt officials? Both heroes are seeking to find a way home, but decide they must try and fit in in the meantime (this leads to shocking instances like Dragonfly resolving a fight almost instantly by just shooting a guy in the head on TV).

But the book is not merely satirical. The characters are interesting and likable.  Peyer is not making fun of these characters, instead, he appeals to their situation as a an emotional punch for the two men.

Jamal Igle’s pencils provide a terrific foundation. He is a skilled artist who can draw great super-heroes. Here he makes subtle stylistic differences.  Dragonflyman is almost undefined, but his outfit has wrinkles and does not show off his physique as much.  Meanwhile, Dragonfly’s outfit shows every vein and muscle.  The inking by Juan Castro enhances these little differences. And then there is the colors. In Dragonflyman’s world, Andy Troy paints a bright and upbeat palette. Dragonfly’s world is perpetually dark and grim.

I am really enjoying the Wrong Earth. It is a fun concept that is well written with great and perfectly fitting art.