After about a year or so of Comics Gate bullshit creators have started speaking up. Bill Sienkiewicz, Tom Taylor (more on that at a later date), Jeff Lemire and Howard Chaykin are among the voices.  This has had a rather disheartening result for the Comics Gate crew.

Comics and Diversity has lamented seeing these juggernauts of the industry “slit the Industry’s throat.”

First off, I am not going to go into the actual sales information stuff that tends to challenge their narrative.  Suffice to say, the death of comics is a longstanding doom and gloom that is older than Bill Sienkiewicz’s career.  And the myth of the politics and ideology free comics is just one more thing that damages their approach. It has also brought about… a rage…

One of the core beliefs that fuels Comics Gate is a notion of ownership. 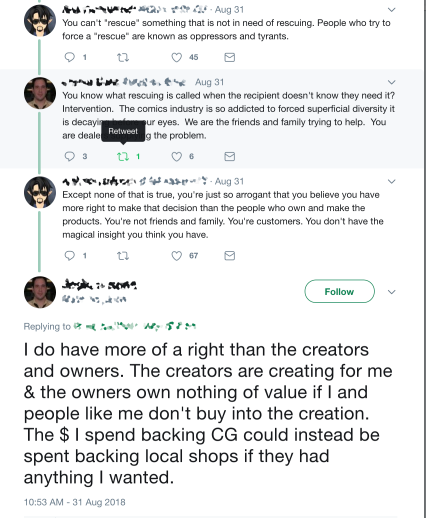 They believe that creator’s jobs are to tell the stories the consumer wants.  Listen, we have a couple of rights as a consumer. One is to stop buying product we are not satisfied with. If I buy a series and I feel like I am not getting my moneys worth? I can stop purchasing it at anytime.

Secondly? I have every right to publicly explain my my feelings…thanks to the internet. I can express my dissatisfaction.  This type of critical interaction is not free of consequence though. If I am rude in my criticism? I might get rude reactions.  Especially if I attack the creators directly. Personally, I would rather have a constructive discussion with the creators of work a read. If I just did not like it…why tag them in?

Being critical of books is not the problem of Comics Gate. It is the focus of their criticism and how that has translated to their approach. They complain about SJW.  They are upset by the inclusion or change to characters of color, sexuality, gender and so on. That character is gay?! Stop forcing Trans People on us! And they have targeted creators to try and get run out of the business. Through the internet they have harassed and condemned and attacked editors and creators…and they mostly tended to fall into certain categories. These creators were people of color. They were women. They were gay. They were trans. And if a white hetero guy complained, he was added to the list…but faced far less aggressive of an attack.

Comics Gate tries to argue they are a diverse group of men and women, gay and straight of all races.  They are concerned that comics are being ruined by a focus on ideology and they want to go back to a time where comics were just fun.  A time that never really existed of course. Comics have been very ideology driven for over 70 years. Superman has always been connected to an idea of human decency embodied in an alien who was sent to earth to survive a dying world. The X-Men focused on people fighting to protect the very people who hated and mistrusted them. It has always been there. It will always be. And yet, in spite of the claims of Comics Gate, those who claim to be a part of it often tip their hats: 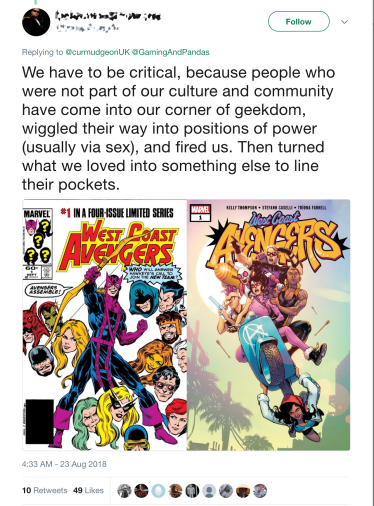 I chose to focus on this claim for a very simple reason. Along with the other screen shot. it is the entitlement. The sense that the real fans are the ones feeling alienated. And you see in this second screenshot here a real sense of that notion that the true fans are being forced out of their world (with a super tasteless and misogynist accusation that the modern creative talent forcing them out are sexually promiscuous women getting their way in and through the business via sex). The example being used is the West Coast Avengers. Now, the West Coast Avengers was always the b-list team. It was not Earth’s Mightiest Heroes…it was the back-up Avengers.  And there is nothing wrong with that.  There were some good stories from that time.

But Marvel just released a brand new West Coast Avengers series by Kelly Thompson, Sefano Caselli and Triona Farrell. Like the original, this team is led by a Hawkeye (in fact, we get two Hawkeyes!). Like the original, it is lesser famed heroes from the Marvel Universe. Thompson’s writing takes a slight tongue in cheek approach to things, resulting in a book that is a whole lot of fun to read. It was a very entertaining first issue! And this is the example being cited as the reason to be vigilant? In fact, what I see as the most common untalked about aspect of Comics Gate? For guys who claim to just want comics to be fun and not full of ideology…they sure seem to hate on fun comics. Squirrel Girl. Domino. West Coast Avengers. I mean, this cover alone is a ton of fun. 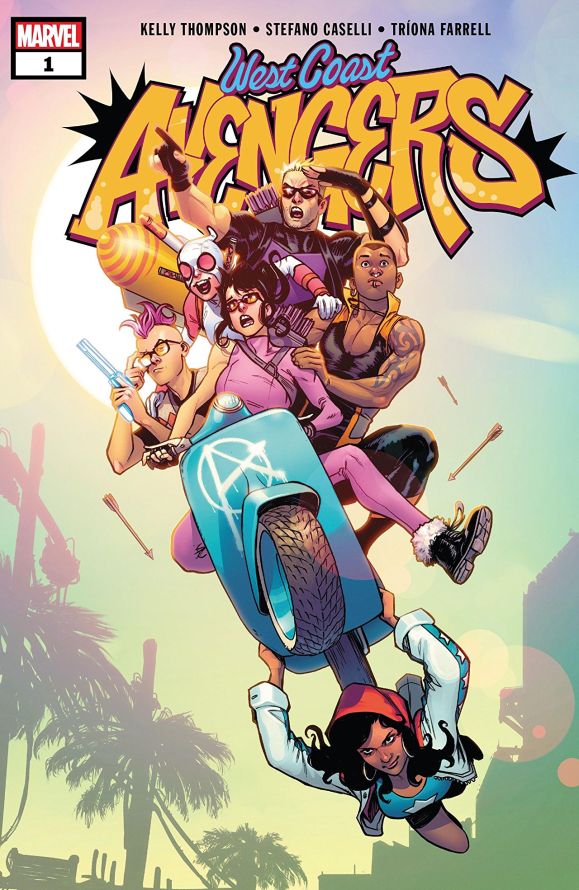 The entitlement of the Comics Gate people is exhausting, and it is wholly misplaced.  You do not own comics. I do not own comics.  Creators can tell the stories they want and if I do not like them? I am allowed to not buy it. I am allowed to say what I did not like about it. But that is where it ends. I am not writing the book. I don’t get to tell the writers how to write the book. If they read my thoughts, maybe I can have a little influence.  But that sure won’t happen when I insult the writer. And hateful ranting about gays or women sleeping their way to the top of comics-wait, what?!- are going to result in you looking like a bigoted loon.  And if you don’t want to be perceived that way…maybe sit down and take a hard look at what is irritating you about “SJW Marvel”. If you are angry about Iceman being gay? The problem is not really that story point. If you are disappointed with how they handled Bobby coming out? After all, not every execution is good. But Comics Gate’s struggle is that when they try and pull on that armor? They invariably fall reveal the problem to be including diverse casts at all. Or worse, that the creators are diverse. When it was revealed award winning writer Eve Ewing was going to be writing a Riri Williams book (after apparently recommending herself last year on Twitter), Comic and Diversity’s Richard Meyer went on tirades about Eve being a diversity hire. After all, she has not written for comics before. Yet, white men like Brad Metzler, Brian Posehn, Patton Oswalt, CM Punk all used unrelated careers to write comics. With the exception of Samuel L. Jackson, non-white celebrities seem to take a real hit when they take a dip into the world of comics.

The attitudes and behavior of Comics Gate just do not belong in the world of comics. Bigotry does not belong. Comics is a huge tent, and there ought to be comics for anyone who loves comics. I want to read good comics. Comics that inspire me. Challenge me. Entertain me. And this seems to be the type of thing Comics Gate does not want. I want none of what they offer.

And you should buy West Coast Avengers # 1. It entertained the heck out of me.