Domino , created by Fabian Nicieza and Rob Liefeld as part of X-Force in the 90’s, Domino was a mercenary with the power to effect probability…or…more simply, she is really lucky. The only survivor of a government experiment, Neena Thurman has chalk white skin and a black oval tattooed on her left eye.

She has been a mainstay in the X-Universe.  Now she is in her own series, written by Comics Legend Gail Simone.

The first issue introduces us to her new team…Domino, the super strong Outlaw and Diamondback.

After a botched mission, the three return back to Domino’s place to find that there is a surprise Birthday Party for Domino.  It is a who’s who of peripheral X-Characters. And, personally, I will never, ever complain about an appearance by Dazzler. 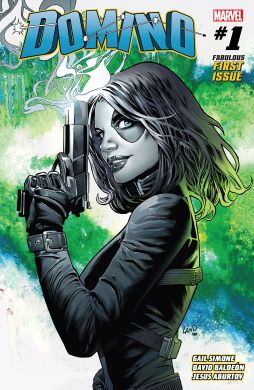 But then her fun is interrupted by a strange old man and his Nurse.  The Nurse is revealed to be more of a henchman named Topaz. During the fight, Domino finds herself a step behind Topaz.

Topaz throws her through the window to plummet to her death, as Domino realizes she does not feel connected to her power at all.

Issue 2 picks up and reveals that somehow, Topaz is able to affect other mutants powers. At the old man’s request, Topaz allows Domino’s luck power to kick back in, resulting in a last minute save by a certain web-head.

Domino is understandably shaken and is reluctant to accept any more help from Spidey, in spite of his kind offers.  Then Outlaw shows up to bring Domino back.

After the party ends, Domino tests her powers while on a morning jog, and then gets a new job protecting a floating casino.

She recruits some green skinned muscle to join herself, Outlaw and Diamondback in the mission.  But she finds herself wondering if there is a betrayal.

This all leads, of course, to a horrifying double cross. Domino receives a suggestion from Amadeus Cho to see if, rather than just react with her mutant luck power, maybe she could learn to be in control of it. So Domino sets out to find a mysterious teacher recommended by Cho.

Written by Gail Simone, I have been enjoying her take on Domino.  Domino is snarky and bold, but shows a vulnerability.  The first three issues have focused heavily on the idea that Domino is feeling disconnected, and trying to bond with her friends.  Specifically her Posse of Diamond Back and Outlaw.

I find myself really liking Outlaw.  She is simply a fun character, brash and yet sort of sweet in her dedication to Domino.

The whole focus on friendship is really a way to keep the story small and grounded. Domino is not saving the entire world. Just her and her friends. The stakes are high for her.  In the second issue, the short sequence with Spider-Man shows Peter’s sweet and generous side.  While she is hesitant with him, she senses his ingrained decency. Simone delivers a Domino who has not really had to struggle with fear of danger, due to her power. But now, when it appears it could be lost, she is shaken to her core. Gail is known for an undercurrent of humor, and that is definitely present in Domino.

And I have to point out the art by David Baldeón. His faces are expressive and communicate a tremendous amount of emotion.  But he is also able to couple that with dynamic action shots.

As usual for a Marvel Book, Domino has taken fire from certain “fans”. This stems mainly from the writer of the series of Gail Simone.  They believe she is a Social Justice Warrior foisting politics upon the reader.  I am not quite sure what politics there are in Domino.

Thus far, we have had fire fights, Domino in lingerie, explosions and a dog.  Apparently, the anti-SJW crowd really hate pugs.

Is Outlaw to conservatively dressed? Do we see to much of the Hulk? Seriously…I am lost.  The focus of the book appears to be absurd fun, with some heart.  Nothing more, nothing less.

Oh…wait…I think I realize what they are hating here.  I now see the insidious plot by Gail Simone.