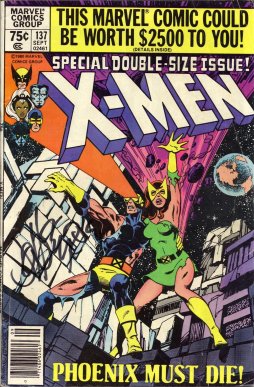 In the world of the X-Men…death is permanent for about five to ten years.  In the early 80’s Chris Claremont and his team on Uncanny X-Men decided they needed to really do something with Marvel Girl…or rather Jean Grey.  In a moment of great danger, Jean appears to sacrifice herself to save her teammates.  She then returns triumphantly and infinitely more powerful, calling herself Phoenix.  As time passes, it is clear something is wrong…Jean seems to be flirting with darker forces. It culminates in a galactic adventure in which she destroys an entire planet.

Editorial declared that she could not live…there is no coming back from genocide. And Jean Grey could not come back.  She was as dead as Bucky Barnes. Yeah…that used to have a bit more meaning. But editorial had a rule…Jean could only come back if there was a way to make her not a planet killer. 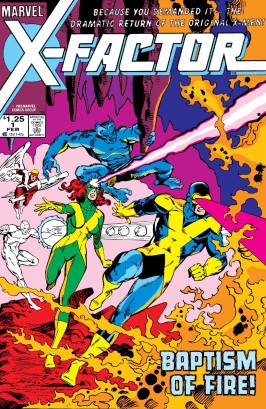 And so years passed by and Scott Summers married Jean Grey clone (no, really, she was revealed to be a clone of Jean Grey!) named Madelynn Prior and everybody moved on.  And then came along some upstart kid named Kurt Buseik. Kurt really wanted to see the original five reunited. He told Roger Stern who told Fantastic Four artist and writer John Byrne.  And so editorial set forth bringing back Jean Grey. It was discovered that the Phoenix Entity had cloned Jean.  The real Jean Grey was at the bottom of a lake in a cocoon

Jean is revived and joins the original five as undercover mutant hunters. Scott leaves his wife for Jean (ugh) and time passed.  Eventually, Jean was killed again in a confrontation with Xorn.  She is briefly resurrected by the Phoenix force…but then remained dead again.  Which brings us to Phoenix Resurrection.

Almost two years ago, the X-Men teams returned to the mid-nineties Blue and Gold designations.  Phoenix Resurrect is the five issue mini series that brought Jean back.

The X-Men are dealing with bizarre psychic phenomenon around the world. Kids are found in comas, waking with no memories of how they got that way.  Kitty splits the various X-Groups into teams to visit various old sites, and find themselves facing long gone foes.

They determine that the Phoenix Force is back on earth, and it is trying to restore itself with the power of Jean.

For the first couple of issues, it gets a little confusing.  The story keeps jumping back and forth between the X-Men investigating the strange occurrences and Jean working as a small town diner waitress in a world seemingly occupied by dead X-Men. Her boyfriend is Scott Summers, the local mechanic is Logan…

The main thrust of the story is setting Jean up as separate from the Phoenix Force. 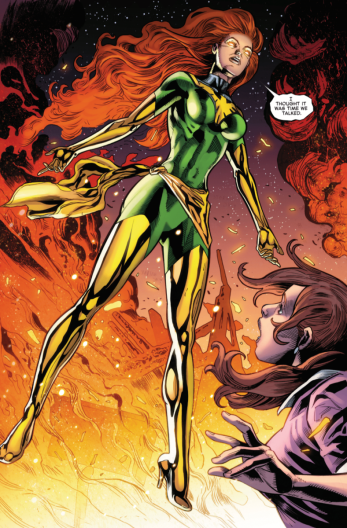 The more frustrating part of this series is the art.  The first issue is drawn by Leinil Francis Yu and looks gorgeous. He then does not return until the fifth issue where he is joined by Joe Bennett (penciler of issue three). Issue two is drawn by Carlos Pacheco  and issue four by Ramon Rosanas. All of these artists are quite good…but they are also quite different.  And if this were a series set in different eras, that might have been very effective.  However, in this case, it becomes disruptive to the story flow, especially in trade paperback form.

The colors by Rachelle Rosenberg are vibrant, emphasizing fiery oranges and yellows later in the series.

Overall, I enjoyed the series, but it is also more of a setup. It gives closure to Jean and her long-lasting Phoenix saga and to her relationship with Cyclops.  It also sets up the return of Jean as leader.

Jean is inspired to build a team of X-Men who will work to make the world a better place for mutants alike. And so, she sets out with the help of Nightcrawler and the former X-23.  After recruiting Namor and Honey Badger (I confess, I was completely unfamiliar with this character…but she is a clone of the All New Wolverine…treated as a sister). Their final members are a techno path named Trinary and a guy named Gentle. Again, I was unfamiliar with Gentle…but this time I am not sure why…it turns out he started appearing back before my X-Men drought began around 2010…but there you go.   Anyways, the team sets about to save Trinary from Indian authorities (she used her powers in robin hood fashion). 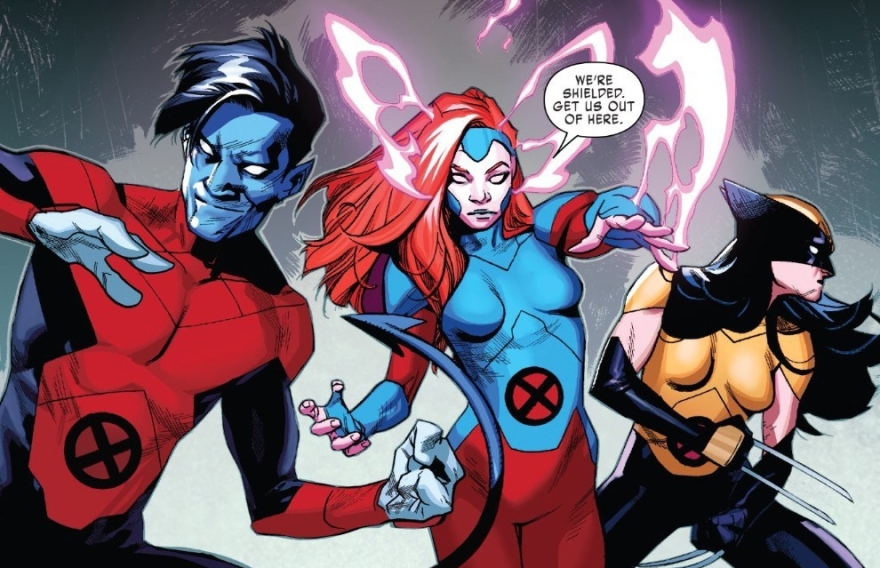 Tom Taylor is writing this series, and he is setting things up very nicely.  His team is an interesting selection of characters. I admit, for me, the primary reason I picked up the book was for Nightcrawler. But I am really enjoying how he is introducing the rest of the characters. The issue where they are trying to bust Trinary out is an exciting issue.

The way Taylor is using Cassandra Nova (the twisted twin of Charles Xavier) as the evil mastermind working to set up Jean Grey and her team as they are just starting to put their plans into action has been intriguing three issues in. 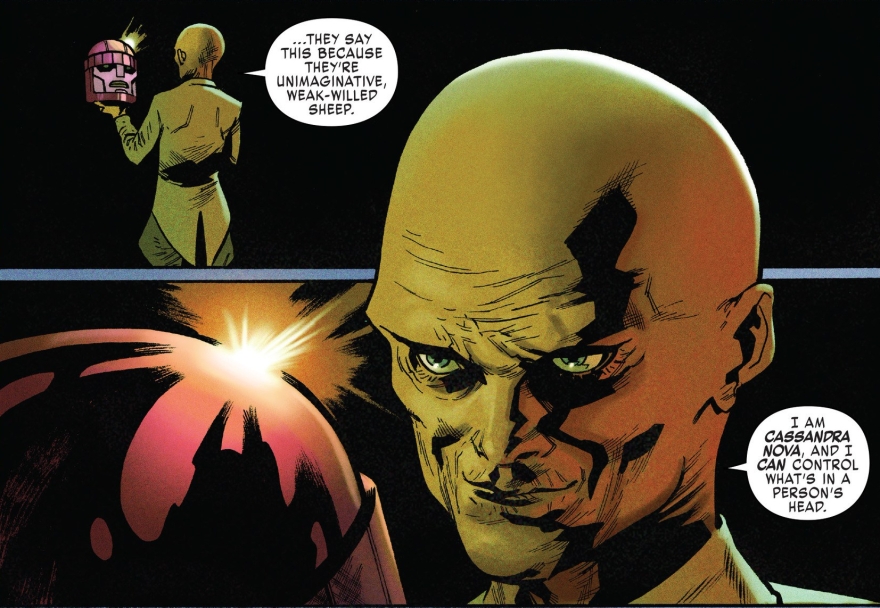 I also am fascinated by the fact that, in spite of two Wolverine style characters, the action seems secondary.  I mean, clearly it is there, but it is really about a certain optimism.  Jean is not running the team as a villain fighting supergroup as much as she is building a foundation for a better world.  When Nova’s first move results in framing Jean for assassinating a world leader, she is forced to hide her Red Team in Wakanda, meaning any steps outside of Wakanda puts them in great danger as enemies of the state so to speak.

The make-up of the team interests me, as it is a combination of classic X-Men (Jean and Nightcrawler) lesser knowns (Gentle and Honey Badger) along with an atypical choice such as Namor. It is a racially diverse team as well.

X-Men: Red is illustrated by Mahmud Asrar. He has an artistic style in the vein of Stuart Immomen, but in a way of being his own style, not a knock off.  I really am enjoying his art in this book. Each character is distinct from each other, and not just the obvious ones with physically manifested powers.

Asrar designed the visual aesthetic of the team, with uniforms that feel inter-connected.  There is a cohesiveness in the look of their costumes that does not sacrifice individuality. I am finding myself really drawn to these designs which also pay some homage to earlier costumes. In fact, both Wolverine and Honey Badger have costumes that harken back to early Wolverine colors.

The series has also treated us to gorgeous Travis Charest covers.  Issues one and two, in fact, were things that made me opt to buy the book physically, rather than in the digital format. Charest has always struggled with keeping up on a monthly book…but he has also always excelled at illustrating stupendous covers.

The full team will also include Gambit. For me, this is a risky choice, as I have never been a huge fan. But I am finding myself confident enough in the path of Taylor and Asrar to feel like the addition to the team will work.

So far, everything on X-Men Red has been clicking for me, instilling a lot of confidence in Tom Taylor and Mahmud Asrar and their team. I look forward to seeing where this story goes.