When Image was first formed, it was pitched as comics owned by their creators.  But it quickly became exactly what the seven creators walked away from.  Instead of simply doing their own things, the Image Seven created a shared universe.  Spawn was taking place in the same universe as WildC.A.T.s and the Savage Dragon and so on.  Of course, Rob Liefeld and Jim Lee expanded their studios with talent searches and the like, which led to expansions of their individual lines.  Youngblood was intricately tied in with Spawn, with Youngblood’s Chapel being revealed as the killer of Al Simmons (who becomes Spawn).  Jump ahead a few years and Rob Liefeld quits or is booted from Image.  He owns the rights to the characters created for Extreme Studios, so they were going bye bye as well. 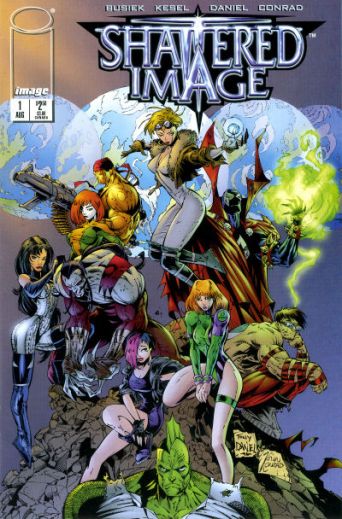 How does Image solve this?  A 1996 Event Comic called Shattered Image. Get it?  Basically, this is a Crisis on Infinite Earths Lite.  The four issue series was written by Kurt Busiek and Barbara Kesel and several artists who were just starting out at Jim Lee’s Wildstorm and Marc Silvestri’s Top Cow studios.

The Image world is splitting into six distinct earths, breaking apart at the creator lines.  Characters are popping in and out of reality…forgotten and remembered and forgotten again.  A small team is put together with characters from every corner of the Image Universe.

The team is able to stay out of phase with the anomaly so they do not disappear.  They try and recruit Spawn, but Spawn sees this as an opportunity to be reunited with his wife Wanda.  After all, no Chapel, he does not get killed…right?  So Spawn rejects the offer but follows them around.  The Extreme characters are rabidly zapped from existence, and then the series is about stopping the split. 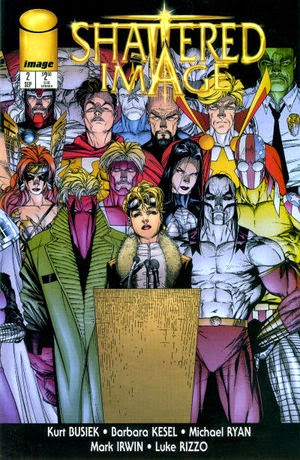 The big bad villain is some lady called Entropy.  Entropy is mysterious, which is a polite way of saying poorly defined.  Her motives don’t make a whole lot of sense, but that is because, really?  She represents Marvel and DC.  Towards the end she tempts the members of the team with poorly hidden versions of the X-Men, Batman, Spider-Man and so on…which is a repetition of that Dave Sim written Spawn issue that tossed aside any semblance of story to be a “Creator’s Rights” screed.  And it is a pale comparison.  In the end, of course, the worlds are reunited (minus Rob Liefeld’s characters which nobody remembers).  Funny enough, it was not that much later that Jim Lee sold Wildstorm to DC Comics and they were removed from the Image Universe.

While Busiek and Kesel are more than capable writers, this series is a disjointed mess.  And they had a thankless task.  This was not some natural outgrowth of a major story line.  This was a quickly thrown together to try and solve a big error in choice.  They needed an “In Universe” explanation as to why Liefeld’s books were gone.  This is a completely utilitarian series and it shows.

The Image creators should have started with their own individual worlds.  Instead, they wanted their own Marvel/DC Universe.  And this just created totally unnecessary problems.  If Spawn took place in his own world, there would not have been a continuity issue with Chapel disappearing.  Rob would have walked off with his own toys and everyone could just carry on.

There is a huge mis-step with this series beyond the purpose of it.  The art should have been provided by the six remaining creators.  Instead of guys who were just starting out, this should have been full of art by Silvestri, Lee, McFarlane, Larson, Valentino and Portacio.

The real irony is that Image has now evolved to look like the promise they held.  Creator owned comics, in their own insulated worlds. Spawn does not pop up in the Walking Dead.  Savage Dragon does no appear in Saga.  It is now delivering on the promise that those early days did not.