There have been a lot of box sets of film franchises. Often, the series is owned by one studio. This gets tougher for many horror franchises. Child’s Play is owned by MGM, the other films are owned by Universal. Paramount owned the first eight films in the Friday the 13th series, New Line had the later films. Halloween was owned by multiple studios, with the first five films settling in under Anchor Bay and the sixth film on belonging to Dimension Films.

Earlier in the year, Shout Factory’s horror line Scream Factory announced a pretty big deal. They got Dimension, Universal and Anchor Bay to agree to allow a box set with every single Halloween film. All ten films. And you get the television versions of Halloween and Halloween 2. I watch the television version of Halloween every year. But the real big shocker? The never before released in America Producer’s Cut of Halloween 6: the Curse of Michael Myers. It has been long rumored to be vastly superior to the (admittedly abysmal) theatrical version of the film.  I addressed that earlier this week.  They also include the unrated versions of both Rob Zombie films.

The packaging is terrific.  A nice box houses ten individual cases, black instead of the traditional blue.  The cover art is the classic cover art.  The box has some really good and atmospheric painted art. 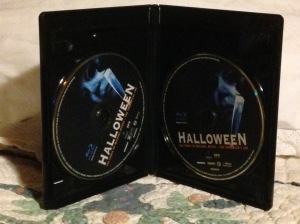 Every disc includes special features related to the individual film.  These are made with care and the producers  manage to get a lot of the original teams to return and discuss their experiences on the film.  If you love to dive into special features (as I do), this is a very rich set.  The set includes a bonus disc with new special features (mostly relating to Halloween’s 3-5).

The picture quality is great, keeping some of the grain, but the blu-ray transfers are never muddy, allowing us to never miss some of those great out of the shadow reveals.  This is how a box set should be.  I truly wish the Shout Factory had been in on the Friday the 13th and Chucky box sets…because we would more than likely have gotten a pretty sweet deal out of it.  The Shout Factory has set a standard here.  This is not that surprising, they have spent years making themselves stand out as kind of the Criterion Collection for pop culture.