Rob Zombie returned for the sequel to his fairly successful reboot.  My understanding is he had not intended to, but was talked into it.  And from the outset, this one is a total mess. 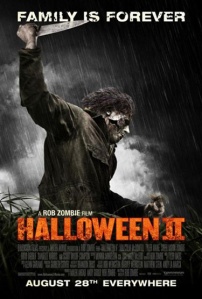 It opens with a bit of text regarding the psychological significance of a white horse.  It then gives us a flashback to young Michael and his mother having as loving a moment between a mother and son as you can have at a sanitarium.  This right here is continuing a wrong foot.  In the original films, Loomis talks about how Michael was quiet and interacted with no one, to the point where everyone grew complacent around him.

The film just jumps ahead fifteen years, to the end of the previous film.  In an imitation of the original Halloween 2, there is a hospital sequence, but it is only about 25 minutes long and then Laurie wakes up a year later.  Was it a memory?  A dream?  The film is unclear.

We learn Laurie is in therapy and has rage issues.  Loomis, on the other hand is now a psych-babble hack who uses Michael as his money-maker.  This is an unpleasant take on the character, which makes him far less sympathetic.  He is convinced Michael is dead, even though no body has ever been recovered.

Michael, very much alive, has been hiding out, building up his murderous rage.  He is haunted by dreams of his mother, and an avatar of himself as a little boy who speaks to the vision of the mother.  There are instances where Michael grunts as he kills that seem out-of-place.  A completely silent Michael makes for a better Michael.  Michael also spends a lot of time with no mask, which just seems wrong.

Laurie seems to have a sudden psychic connection to Michael that comes out of nowhere.  And Laurie has become an entirely unpleasant.  In fact, nobody is really likable in the film beyond maybe Sheriff Bracken and Annie.  But most everyone else is just hard to like or care about.  This is a bad thing for your lead.  It is hard for the viewer to invest our time and emotion to care about a character we cannot even really like.  And to pretty much have her cast her lots in with Michael (this is the same problem the recent Texas Chainsaw Massacre sequel had) is troublesome.

The resolution of the film is nonsense leaving this a complete (as stated earlier) mess of a movie.  It robs Laurie of any actual strength, and ultimately punishes her.  It is pretty clear that Laurie Strode was accepting Michael’s ways.  Her deviant smile before the cut to black is far to dark to be interpreted as triumph over the evil of Michael Myers.

There are some great shots, as Zombie has a real eye for framing shots, especially when going for a creepy vibe.  And there are some solid performances, especially from McDowell, Dourif and Harris.  People need to give Dourif more roles like this.  He shines in the film.  And Zombie (as usual) peppers his film with tons of character actors who clearly had a lot of fun in their roles.

But in the end, the writing and ideas are inconsistent, the characters overwhelmingly unpleasant and a Michael Myers who does not feel at all like Michael Myers.