Halloween 6: The Curse of Michael Myers was terrible.  It was Plodding, confusing and a genuine mess.  I went back and revisited it and even realized I had filled in the blanks.  The cult that oversees Michael is barely seen.  Oh, we meet some of the characters, but it is unclear why or how they know stuff.  Instead, I was filling in my memory with stuff I had heard about the ideas behind the film. 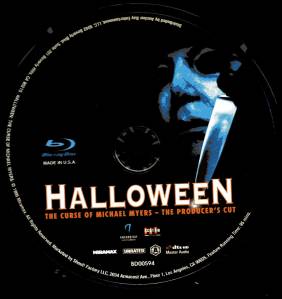 After almost two decades, we have finally gotten a legit copy of the often bootlegged Producer’s Cut.  This is the film the producers wanted to release.  And you know, had the succeeded?  Part 6 might have had a better reputation.

Oh, yeah, there is still creepy stuff like Jamie being impregnated by her uncle Michael Myers.  But other things are more explicit, like the cult that has overseen Michael.  It makes the talk of the voice that called to Michael to kill his family make a bit more sense.  And the ending is far better.

In a lot of ways, this is a very different film.  Far superior to the theatrical release.  Of course, it still falls short of being a great film.  Frankly, I still do not find the “Michael is controlled by a Cult” storyline particularly compelling.  And considering the seventh film ignored this plot point entirely… I am not alone in such a feeling.

But it is a lot of fun seeing the new footage of Donald Pleasence.  The ending was chopped short, with Sam Loomis bidding farewell to Tommy, Kara and her little brother.  We just see Michael’s mask on the floor and a distance scream from Loomis suggesting Michael killed him offscreen.  In the version, Loomis walks back into the hospital they had the showdown with Michael in and sees Michael still standing…joined by Dr. Wynn (Mitchell Ryan)… Sam Loomis is not killed in the producer’s cut…but rather faces a cruel fate worse than death.  It is actually pretty inspired and ties back to the original in a ironic way.  If you have  not seen it and are a fan of the franchise, I recommend this one.  The blu-ray also includes some great featurettes exploring the history of this film.