Back in 2009 the movie Dead Snow was released.  It was fairly enjoyable as far as horror comedy goes.  It felt a bit like it was following a blue-print on how to be like Evil Dead 2.  But it had some inventive moments and good practical effects.  This year saw the release of the sequel.  A film that feels like it was made by a stronger and more confident film-making team. 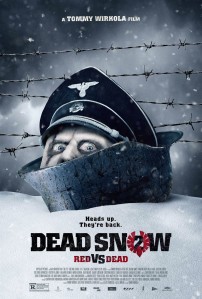 Plot based spoilers are about to occur.

So, Martin (sans right arm) survives, and and shakes the lead zombie by cutting off the lead zombie’s, Herzog)  right arm. After falling asleep at the wheel, Martin awakes only to find himself handcuffed to a hospital bed.  The doctors let him know they were able to save his right arm…except it has a mind of it’s own, it is a zombie arm, afterall.  The police believe Martin killed his friends and believe his rantings about zombie Nazis to be the delusions of a madman.  When the arm kills a couple people, it makes a pretty compelling argument that Martin is the killer.

Meanwhile, The Nazi Zombies decide they must finish their mission that they were assigned in life.  When they try to raise dead soldiers in a cemetery, it does not work.  They realize the ground was not cold enough to preserve the bodies, they are to decomposed.  So, they realize they must get fresh bodies by killing locals. 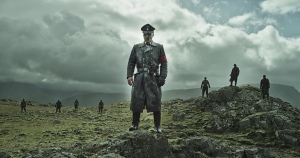 Martin is freed by a kid who has contacted the Zombie Squad, and American group of Zombie experts run by Daniel (Martin Starr from Freaks & Geeks, Undeclared and Party Down).  Martin goes on the run while waiting for the Zombie Squad to arrive in Norway.  He meets up with Glenn, who works in a WWII Museum.  The Nazi Zombies show up and kill a couple busloads of tourists and then raising them.  Then the Nazi Zombies steal a tank leaving Martin and Glenn behind.  It is here that Martin discovers he can kill the zombies with ease using the Zombie Arm…and that he can also resurrect the dead.  the zombies he raises seem benign, almost more like a pet.

This is when the Zombie Squad appears…surprising Martin because it is just Daniel and two ladies… general geek Blake and Star Wars Geek Monica.  They decide the best move is to revive Russian soldiers from WWII who were prisoners of Herzog.  During WWII, Herzog killed them and buried them in the mountains. 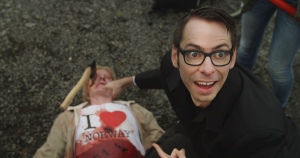 The dead Russians are raised, a big battle ensues.

This is a fun film, and in a lot of ways, surpasses the original.  There is plenty of guts for gore-hounds, plenty of humor, often reaching for Deadalive heights.  It may not quite reach it, but there is plenty of absurdity.  The characters are all pretty likeable, so you root for their side.

When I say absurdity, to an extent I am saying, oh boy…I cannot believe they went there.  But I found myself enjoying the performances and the story enough that it felt…appropriate for the film.  The dark goofy humor works pretty well, and does not feel forced.  This is a solid bit of genre film. 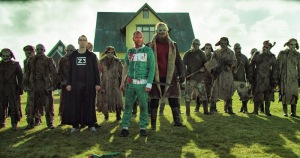