I feel like one of the strangest and unfair portrayals of Aunt May throughout the history of Spider-Man was that of the woman scared of Spider-Man.

For a long time, in the world of comics, Aunt May was one of the people who thought Spider-Man was scary and or untrustworthy.  This really seemed to last a long time.  It would either come up or be ignored until needed for a story point. 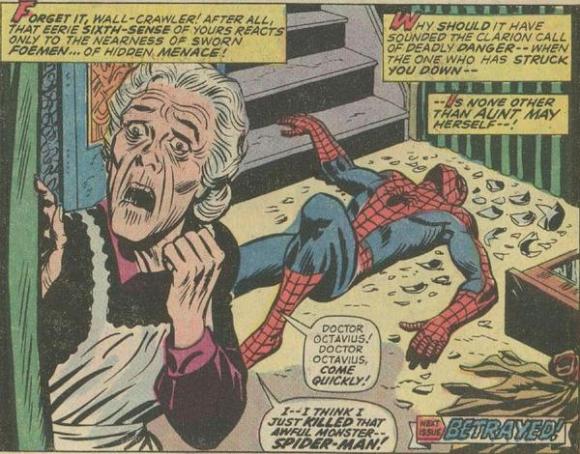 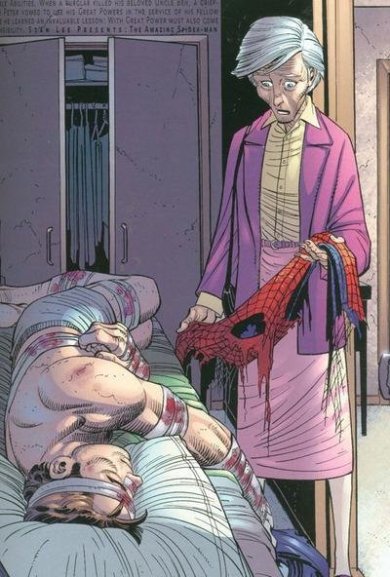 Yeah, once she knew Spidey was Peter…all was good.  The story where she writes a letter to the editor expressing her change of heart is actually a wonderful story.   But May functioned solely to be a plot point for Peter.  There were many reasons that she was fearful and could not know…but it always came down to how frail and generally weak she was.

And I just find the portrayal hard to believe.  Aunt May raised her nephew for years, she and Ben were perfectly capable and loving stand ins for Peter’s parents.  Peter is the man he is because of the influence of Uncle Ben and Aunt May.  Yes, it is Uncle Ben’s words at the heart that drives Peter…but it was both Ben and May that taught Peter right and wrong.

And I find it hard to believe such a weak, fearful and frail person could have managed to raise someone who puts their life on the line for strangers.  This is one of those areas where Peter Parker/Spider-Man and Clark Kent/Superman meet.  They are the product of their environments.  They are who they are because of their parents.  Not in spite of that parenting.

It would have been nice if May got to be shown as a source of Peter’s strength from day one, instead of an impediment for it.  Spider-Man exists in part because of her…the idea that she would be frightened of Spider-Man is silly.  I noticed in the Sam Raimi movies, May gets over her concerns about masked vigilantes quickly, becoming the voice of Peter’s conscience.  It is May who speaks to the importance of Spider-Man in the second film.  May recognizes heroism in those movies and has no fear of it.

Raimi gave us the Aunt May we should have had the whole time.

2 thoughts on “Spider-Man and Aunt May…” Leave a comment ›