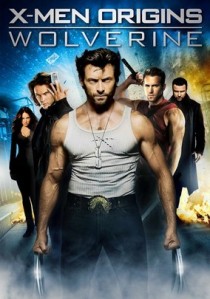 No doubt, the fan favorite of of the X-Men films was the comics fan favorite Wolverine.  Hugh Jackman held his own with some top talent in those first two films… a solo Wolverine film was kind of a no-brainer.  And putting it in the hands of the director of the stunning Tsotsi, Gavin Hood seemed like a terrific idea.  Then casting started to leak… Ryan Reynolds as Deadpool (what a good choice), Liev Schreiber as Sabertooth-wait…what?  In the first X-Men Movie, Sabertooth was played by wrestler Tyler Mane.  Now, the change in actors is no big deal,  It happens.  But the first movie played off the characters as unfamiliar with each other.  Wolverine’s memory loss is his easy defense…Sabertooth’s?  Don’t know.

The film begins in the 1800’s with a sickly young boy.  Sitting with him is a slightly older boy who is whittling with his fingernails.  The sick boy’s father steps in to tend to his on when there is a sudden commotion downstairs.  The father leaves, and there is some yelling followed by a shotgun blast.  The boys rush downstairs…the sick boy sees his dead father and the shooter, who tries to tell the boy something, but the young man (who we learn is named James) is enrage…he realizes there is something happening with his hands…he becomes horrified as claws of bone protrude from his hands…the rage returns and he lunges at his father’s shooter-killing him.  In the shooter’s dying breath, he says he is James’ true father.  The young boys run.

This leads into a really nice montage of the young men growing to adult hood as soldiers in a series of wars, world war one, two and so on…finally settling on Vietnam …Jame’s brother Victor goes ballistic and kills civilians, as James tries to stop him…they end up being court marshaled.  They are recruited by Stryker (Danny Huston) who is putting together a special ops team comprised of mutants.  After a mission snafu, James, now called Wolverine walks.

Wolverine hides out in the wilds of Canada where he meets a beautiful young woman named Kayla Silverfox (Lynn Collins).  They fall in love and live in a cabin.  After she is killed (as super-hero girlfriends are prone to do) by Sabertooth, Wolverine seeks revenge.  After Sabertooth trounces him, Wolverine is approached by Stryker with an offer to make him stronger.  Agreeing Wolverine is subjected to a painful experiment, giving him the famed adamantium skeleton.  Then they try and double  cross Wolverine. 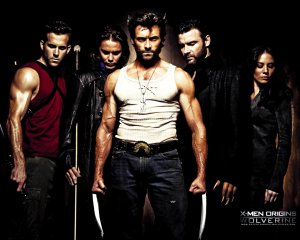 He escapes and meets up with surviving members of Stryker’s crew, discovering that Stryker has a secret plan to build the ultimate mutant soldier that he can control.  Wolverine finds out that Stryker is kidnapping young mutants and using his brother to do the deed.  Wolverine runs off to the secret base with the help of Gambit (who doesn’t do much beyond fly Wolverine there and wish him luck.

A final confrontation results in Wolverine and Sabertooth fight Deadpool to the kind of death, Wolverine losing his memory via a magic Adamantium bullet and Kayla’s death-but not before sending Stryker for a long walk, and a digital Professor X who needs no chair.

The truth is, this film is what you call a major mess.  By setting it in a vague “the 70’s” you start forcing the films into a specific timeline.  The first three X-Men films all took place in the near future.  The film features a high school age Psyclops.  Making him in his mid to late 40s.  Actor James Marsten was about 27 at the release of the first X-Men.  And there are the confusing aspects of why nobody seems to remember this moment of history.  It is hard to believe that Professor X new where to pick up all those kids and yet is oblivious to Wolverine.

The real positives of the films are the strong casting choices (Lost’s Kevin Durant is great as the Blob…Danny Huston, Liev Schreiber and Ryan Reynolds are strokes of genius).  Jackman shows why he owns the character on screen again.  The performances are mostly good…but they are in a story that seems overly convoluted and needlessly confusing-even by comic book standards.  It has a nice beginning, but it falls apart quickly.  It has some very goofy action set pieces and some legit humor going for it.