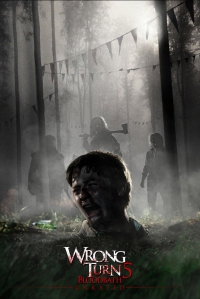 No lie…I really liked the first Wrong Turn.  It had been awhile since the Hills Have Eyes, and the inbred cannibal hillbilly genrea had not taken off.  You had a strong young cast fighting back again the mutant inbred cannibal hillbillies.  And while they would set traps and play cat and mouse, the young cast of characters rose to the occassion and fought back, setting traps of their own and proving themselves more than fodder.

The sequels rapidly devolved from this, becoming all about the horrible death traps and cruel deaths and characters who existed as nothing more than the animals caught in the traps.  The prep to fight back never happened… oh sure, characters might talk about it, but it was always right before the ICMH brutally tortured them to death.

So, imagine my surprise to find that Wrong Turn 5 changes everything, retu-oh, who am I kidding?  The film is the second prequel in the series, with number four being the “origin story” for the series.  This one establishes the family as having been reunited under the guidance of good old dad (Doug Bradley).  At least I think he is dad….he may just be the guy who bosses the ICMHs.

Meanwhile, a bunch of crazy teens are planning  to attend the Mountain Man Festival.  It is like the Burning Man festival but the name is different.  Or something.  On their way, they get into an accident, seeming to hit a man who steps in front of their car.  It turns out to be a trap-but just as it starts, police arrive.  They take the kids and the old man in, where they discover he has a very longstanding warrant for murder.  The ICMH do not take kindly to the incarceration of their dad.  So they pick off the kids and find elaborate ways to kill them, (turning people into bombs, doors that eviscerate you when opened, burying people up to their necks and using lawn care products on them… all gruesome stuff.   The characters are not remotely intelligent and offer no resistance.  They pretty much walk up to be killed.  The “at an mouse” stalking seems pointless as there is no need to sneak up on the victims.  There is never a sense that the bad guys will get their comeuppance.  No matter how cruel they are, they will pay no price.

That is the one problem with prequels.  You know your villain has to survive…and you have a pretty solid notion that this batch of characters won’t.  And for a lot of horror films that translates to little regard to the “heroic leads”.  They are there to fail, and little thought is put into how they might “fail heroically” so to speak.  And I get that we have arrived at a point where the real point of these types of movies is “the kills”.  But the fact that audience and filmmakers have agreed to such a lazy formula is more than a little depressing.

This film is unfairly classed up by Doug Bradley.  He offers a solid performance, which is not a shock, Bradley granted Pinhead a regal stature even in the weakest Hellraiser sequels.  Yet, I say a role that has the character threatens to have his family gang rape a blind woman.  But that fact kind of tells you everything you need to know.  Bradley deserves better than this.