So, Ang Lee’s Hulk just did not quite work. With no sequel on the horizon, the rights reverted back to Marvel, allowing them to add this film to their budding extravaganza. Gone were the stars of the original and director Ang Lee. In was director Louis Leterrier and star Ed Norton. A part of me was disappointed we lost Bana and Sam Elliot…but it is hard to complain about actors like Norton and William Hurt. 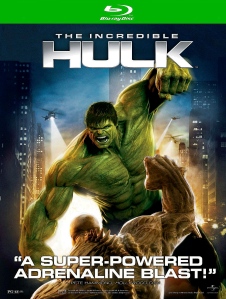 The film starts out with Bruce Banner on the run. The credits hint at an experiment gone wrong, Betty Ross (Liv Tyler) getting hospitalized and General Thunderbolt Ross (William Hurt) both threatening Banner and looking pretty heartbroken over his daughter’s condition. (there is a nice nod to the television show in this sequence)

Banner is now hiding in Rio De Janeiro, working at a cola bottling plant. He is trying to learn different techniques to avoid overstimulating his system and becoming the Hulk. He is corresponding with someone codenamed Mr. Blue (who is stateside) and going by Mr. Green. They connect via encrypted internet and mail. He is also trying to learn the language watching Sesame Street.

He is using his science smarts as a handy-man for the plant, trying to stay under the radar. The owner of the plant does not understand this-recognizing that Bruce is working way below his skill level. While fixing some equipment, Bruce cuts his thumb. Bruce freaks out and actually stops the plant so he can catch his blood. He ends up missing some that mixes with the soft drink. It gets shipped to the U.S. Bruce notices an attractive co-worker being harrassed by three rather tough looking guys. They start to push Bruce around. In an amusing moment, he tries to tell them not to make him angry…but his grasp of the langauge leads him to tell them that they “would not like him when he is hungry.” The potential crisis is averted and no mayhem occurs.

Bruce received a package from Mr. Blue that contains a plant that might cure his condition. Unfortunately, the experiment fails.

Meanwhile, in the states, someone drinks the infected softdrink and is hospitalized for gamma poisoning. The amount of it gets the attention of Thunderbolt Ross. The General assembles a team that includes Russian born elite soldier Emil Blonsky (Tim Roth), on loan from Britain. They set out for Rio De Janeiro based on tracing the soft drink shipment.

Arriving in Rio De Janeiro, Ross and his team track Bruce down. Banner realizes something is wrong and proceeds to slip out his window. He is chased through the roof tops by Blonsky (the Rio De Janeiro slums make this chase pretty exciting and intense).

Banner stumbles into the thugs from earlier who chase him into the factory. They start to assault Bruce and that kicks off his first real transformation of the film. At the same time, the Hulbusters show up and end up getting their butts handed to them. Blonsky demands to know what they were up against, so Ross hesitantly fills him in.

Bruce wakes up a couple countries away and starts to work his way back to America. Mr. Blue needs more data and everything Banner had is back in Virginia. He goes to the university, where he sees Betty…and her new boyfriend, psychiatrist Leonard Samson (Modern Family’s Ty Burrell). Slipping away he pretends to be delivering a pizza, bribing his way into a computer lab where he tries to hack into the system…but he find all the files are gone.

General Ross convincing Blonsky to undergo treatment… they inject him with an experimental super-soldier drug that was an attempt to replicate a serum that was lost. It enhances Emil’s speed, strength and senses.

Staying with an old friend, Bruce runs into Betty who brings him to her place and provide him with a zip drive that contains the files he needs. They go to the college and Bruce manages to upload the files to Mr. Blue. As they are leaving the campus, the military rushes in, tipped off by an uncertain Samson.

This results in a chase the inevitably causes a change of clothes, so to speak and the Hulk takes on Ross’ men. Unlike the first appearance in the film, where the Hulk is hidden by shadows, here we see the not so jolly green giant in full sunlight. The Hulk fights against sonic canons and tanks. Blonsky couragely races up the field testing his new enhancement. He leaps at the Hulk AAAAAAAAAANnnnd…the Hulk swats him aside like a bug. Emil slams into a tree and appears to have been broke into tiny pieces.

Meanwhile, Betty runs into the fray as a helicopter is on it’s way to bomb the holy heck out of the Hulk. General Ross tries to stop this, but fails, and the Hulk protects Betty from the explosion. The Hulk leaps away, with Betty in his arms. Hiding in a cave, Betty manages to connect and calm the Hulk.

Elsewhere, Ross is clearing out Betty’s home for any information and research she might have. Leonard is watching and expresses great disdain for the General and they we he treats his daughter. General Ross goes to check on Blonsky, only to discover he is healing rapidly.

While that is going on, Betty and Bruce are on the run, trying to reach Mr. Blue. They do find him and he is thrilled to meet Bruce. Mr Blue is Samuel Sterns (Tim Blake Nelson) and he has been busy replicating Bruce’s blood for tests. They attempt a test to cure Bruce. At first, it seems to set the Hulk off-but then takes effect. They are unsure if it is permanent or not. Sterns is shocked when Banner says they must destroy everything, but that never gets to happen as the military busts in. They arrest Bruce, and Ross makes a comment about if Banner has taken the monster from him, things will be unpleasant.

Blonsky has slipped back in. He takes out a guard and then tells Sterns to make him more Hulk-like. Sterns ultimately agrees. Sterns is less evil than overly curious, and he cannot promise it won’t kill Blonsky.

As Ross’ helicopter is flying away, they get reports of a large monster causing mayhem on the streets below. Bruce-unsure if he has Hulk power at all- requests to be dropped into the city. After weighing the options, Ross agrees. And so they drop him from a couple miles in the sky. Although there is no doubt he will become the Hulk, Norton plays up a nice moment as he is nearing the ground and realizes he has yet to start the change.

But luckily, Banner does not go splat on the pavement. The Hulk crawls up and goes to battle with the Abomination that was Blonsky. They go toe to toe in a WWE styled fight. Betty and her father’s helicopter gets caught in the fray. The Abomination goes to destroy the helicopter, but the Hulk stops him and manages to stop the Abomination. The Hulk leaps away leaving Betty and the General behind and prepare for his sequel.

We get one final bit, tying the Hulk to Iron Man… An angry General Ross is drowning his frustration in a seedy bar. In walks Tony Stark who says he might have a solution to the Hulk Problem.

This film gets a lot right that the previous version got wrong. First and foremost…something to smash. Inner turmoil is important to the subtext of the Hulk…but he still needs to break stuff. The battles are pretty fun, especially the final battle. The film also ties into the comics really well, managing to include many characters in ways that never feel forced.

Ed Norton does a nice job, and apparently rewrote much of the script. It appears to have served him well. William Hurt is a different approach than Elliot…but he does a terrific job. If there is no Hulk sequel, finding a way to bring him over to the Avengers would be wise. Live Tyler is stuck as the love interest, and she does a fine job… Though while they indicate she is a scientist…we see no real evidence of it. Tim Roth is great.

There are some confusing things… The film plays loose with the cause of the changes…both anger and simple excitement are credited. It gets a little to slow motion heavy in the action scenes. But it is a lot of fun with a solid cast. It also made for a decent building block for the Marvel Universe, especially the reference to the super soldier serum.