Unlike Batman, who remains pretty unchanged in the new 52, Superman is going way back to the basics.  His parent are dead again, Lois is uninterested in him, he cannot fly and he’s a bit of a bully.  Which all sounds kind of terrible.  Superman’s strengths have been the lack of tragedy.  He’s a good mid-western kid.  He loves mom and dad…he’s in love with his wife, one Lois Lane.  Albeit from another planet.  He make the noble and right choice whenever possible.  Superman is not “cool and hip”, but you want him on your side. 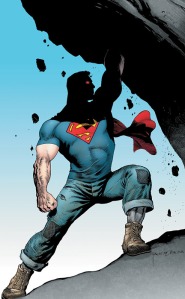 So, I was not thrilled to see the return to pre-Crisis status quo.  Lois Lane not know that Clark and Supes are one in the same just often makes her look like an idiot.  Going back to that standard makes me nervous.  I tired of writers complaining how Super-Hero marriages are to hard to work within the confines of.  It seems like a cheap and lazy complaint.  And I miss the idea of Superman flying home when troubled.  That the Kents are no longer in the world for the Superman family depresses me.

But I felt like I had to give Grant Morrison a chance.  He has written the strongest Superman story of the modern era with All Star Superman.  So it seemed only fair to take the step in and see what Grant did with the old new status quo.  Even if Superman is wearing jeans and a t-shirt.

Grant has rarely disappointed me, often finding strong ways to look a character.  He rebirthed Animal Man in the late 80’s, a run I still love.  He is able to make the absurd seem truly fun and exciting.  So, with careful trepidation and hope, I started reading Action Comics number 1.

Morrison has totally restarted Superman.  Look to the earliest issues of Action Comics, Superman can be a bit of a tough guy.  He has no idea what his limits are, but he knows his power is growing.  Right away, we are introduced to Superman interrupting a party to bring a crooked business man to Justice.  He threatens to drop him from the top of the building to the streets below.  The police are there, not to apprehend the crook, but to take out Superman.  After forcing a confession and escaping the police, Superman switches to Clark Kent.  Clark is not yet working for the Daily Planet, rather a more activist rival paper.  He is best friends with Jimmy Olson, and Lois Lane does not care for Clark.

Then there is Lex Luthor-who is working with the military (specifically Lois Lane’s father) to capture Superman for study.  He has cooked up an elaborate plan to catch Superman.  Morrison manages to cram a lot of characterization and story into the 32 pages, all while living up to the title of Action Comics.  And Superman seems to like having super-powers-he has fun in the issues, he smiles as bullets bounce off him and he leaps in a single bound. 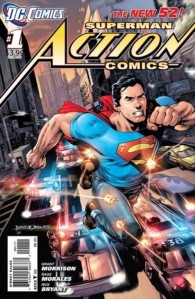 Morrison always writes a great Lex Luthor, and this issue is no exception.  Luthor is arrogant and supremely confident in his intellect.  His hatred for Superman borrows from the more recent past.  The Superman of the New 52 is one who was never Superboy, so Luthor’s disdain for Superman is rooted in his distrust of Superman’s alien nature.  It makes sense and works effectively.  Luthor appears to be a scientist, but not the world conqueror.  Which is, in my feeling, preferable.

The issue has several great “Superman Action” set pieces.  The kind of the you want with Superman, and it reads incredibly well.  Especially with the art of Rags Morales, which is very easy to follow and looks great.  Admittedly, the jeans and t-shirt look feel rather silly, but I know Morrison is has said the first six issues show a costume transition.  I’ve also gotten the impression we are going to see Superman grow from the brash hero to the more steadfast hero we know.  In Morrison’s hands, I feel okay with this and look forward to following his take on Superman in Action Comics.