So, a few years back, when I was regularly reading comics I was following the new Booster Gold series.  After the year long 52

series, Booster was geting a bit of revitalization from the goofball he had been.  The series featured him getting his dream of a serious membership offer from the Justice League only to discover he had a different calling-one that required him to continue to play the ineffectual goof to the wold why he secretly saved the universe.   Booster had to spit in the League’s face-knowing that he was tossing away the respect of DC’s big guns.

This was a great concept, saving the world, though never able to get the recognition and credit.  It made wonderful sense to see a character who became a super-hero for power and glory to not be able to bask in either.  And he became a stronger hero for it.  Booster also discovered that Batman knew the truth.  And he had Batman’s respect.  And Batman understood the tough choice that Booster made…and even saw more dogged heroism than Booster knew.

How did Batman know Booster was jumping through time and fixing problems?  Because of something Booster could not fix.  Rip Hunter, Booster’s guide through time, explained that some things are fixed.  Some moments in time need to happen…or they unravel everything.  Booster desired to prove this wrong.  He went stop Barbara Gordon from being shot by the Joker.  The problem was, no matter what he did?  She ended up shot and destined to be paralyzed and become Oracle.  Oracle was to important to the universe to not exist.  But good ol’ Booster…like Charlie Brown and that football?  He kept trying…even as the Joker beat him within inches of death.

Somehow, Batman discovered this.  And so, Booster had the respect of the Greatest Detective in the World.  What made me think

about this tale?  Not that surprisingly, The DCU Reboot.  Since the reboot happened “in continuity” via the Flashpoint storyline, it got me thinking back to that story.  See, the end of Flashpoint “fixed” errors in continuity.  One of those “fixes”?  Barbara Gordon is no longer paralyzed…and she is Batgirl again.  The unchangeable event is no longer unchangeable.  It’s a simple act that completely undoes Booster’s lesson and undermines his effort.  And if it now never happened, why is Batman so confident in Booster’s leadership abilities in the new JLI?

Apparently?  That Rip Hunter was full of shit, man. 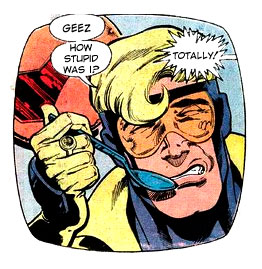