My Grandma was a strong woman.  You would not know it from looking at her.  On the outside, she looked frail.  At 94, she was nearly blind and deaf, but it would be a mistake to see her as weak.  In her early 90’s, she bounced back from a broken hip.  She managed to live on her own into her nineties, only moving in with relatives when she absolutely needed the support. 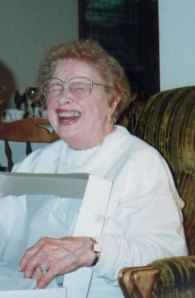 She never seemed to complain much about anything.  She had plenty of reason to.  It is not as if her life was without struggle.   My grandpa dies in 1970…before I was ever born.  She never dated or remarried.  As she grew older, and her hearing lessened, she struggled to follow conversations at family gatherings.  Yet, she maintained an up attitude.  She loved her family, yet never forced her parenting opinions on my parents or my aunt and uncle.  If she really had problems with the job her kids were doing with her grandkids, she kept quiet.

Grandma was a great woman, full of love and humor.  My mother related how she would tell Grandma goodbye and that she would see her next week and Grandma would cheerfully respond, “Maybe not.”

That was just her.  She passed away on Monday, November 29th of 2010.  It was a bittersweet time for the family.  At 94 (and a half), we knew she was ready.  She had no interest in lingering on life support or in pain for months just because the doctors could keep the body going.  She told my mother she did not want to leave the family, but that she was ready.  We didn’t want to see her suffer for months, and so in a lot of ways, the sadness mixed with relief that she died rather quickly.

I confess that I find myself looking at the typical regrets, noting that I did not spend nearly enough time with her in the last few years.  Mostly I saw her at Christmas and any other gathering functions.  Still, I have one memory to cherish the night before she died.  The funeral was Monday December 6th.  It was a good affair, with a large gathering.  We started in the morning and we ended in the early evening.  It was a celebration of a good life… Grandma had a good run, and she will be missed.  But I am glad her departure from this life was quick and have many fond memories to look back upon.