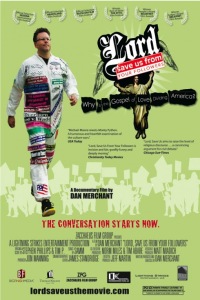 I meant to discuss this movie a few months ago…when I first watched it.  Somehow, it just got put off.

Now, if you are going into Dan Merchant’s documentary Lord, Save Us From Your Followers anticipating Jesus Camp type hi-jinks or the irreverence of Bill Maher’s Religious, you will not find it.  Merchant is not exposing the darker undersides of religion or asking why people believe at all.  No, Merchant is asking why we cannot simply have a dialog instead of back and forth hissy fits.

Merchant is a self identified Evangelical Christian, and he is challenging the Culture Wars.  Right from the start, he touches on “What is something that Christians are known for?” and “What is something that Jesus Christ is known for?”  To accomplish this, Merchant donned a painters jumpsuit covered in bumper stickers and criss-crossed the country.

The answers vary, but what Merchant notes is that the second question?  The answers lean positive.  Most people have positive feelings about Jesus…but Christians?  You could almost tell the beliefs of the people by their answers.  Christians saw Christians as kind and graceful people.  Everyone else saw them as self righteous hypocrites.

But Merchant goes farther…he examines the strife here interviewing a variety of people.  Some well known (Rick Santorum and Al Franken) and some not.   Dan (can I call you Dan?) starts to explore how Christians interact with culture… and it isn’t pretty.  His first stop is San Diego.  There, a Christian group held a massive gathering of young people.  It was a stadium filler full of prayer, concerts, worship, etc.  And then the kids were led to “pray for San Francisco” on the steps of City Hall.  This was not long after Gay Marriage was approved by City officials. 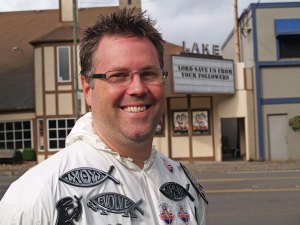 What is interesting is that the representative that sat down with Merchant (Ron Luce) plays oblivious to the controversy that erupted.  Protesters met them.  Shockingly, the San Diego gay community did not get a thrill out of this.  Luce tries playing the typical Christian response when people show up upset by their actions.  He plays that “They call us angry, but they were yelling at us!”  Yet, it is entirely clear that Luce knows what they did.  They got the reaction they were trying to get.  By using kids.  When Merchant suggests other mass media targets like Hollywood and Madison Avenue(since Revoution claims to be trying to save teens from “saturated with media influence”), he is met with a rather insincere answer about they will get to those…Merchant points out that the very next year they did the exact same thing.  Suffice to say, I was left unimpressed with Luce.

The film also focuses things like inter-faith work efforts.  Dan highlights a story about a mainstream radio station that teamed up with a Christian group to raise money for relief in third world countries.

Merchant and his crew put everything together with both reverence and humor.  And in most cases it works.  Personally, I would have cut the whole bit about renaming the cities, as it is far more alarmist than the other portions of the film.  It almost caves into the “War on Christmas” style  and is overly Michael Moore-ish in it’s exaggeration.  I mean, really, are any atheists trying to change city names that have religious names in any great numbers?  The rest of the film is so thoughtful, it feels out of place.

But the most moving moments are towards the end.   Merchant caps the film off with a heart wrenching sequence of a confessional booth of a unique nature and a group with an inspirational look at a group with a unique outreach to the forgotten in their community.

The film is not trying to provide hard theological questions, but it is challenging the viewer to start a dialog, rather than a fight.  To stop ignoring the needs of others because we are to focused on being “right“.  It’s thought provoking, moving, challenging and well made.  I would highly recommend giving Dan Merchant’s film a chance.  It currently is available to Netflix’s Watch Instantly service.