First, I am not really the target audience for this film.  I have read only the first Scott Pilgrim book, and while I did enjoy it, I didn’t ever follow up on the rest of the books.

Video games.  I do play them.  But I am not much of a gamer.  I have successfully completed one game.  The first Crackdown.  That’s it.  And I have zero nostalgia for 8 bit video games.

I am not a hipster.

I have grown weary of Michael Cera…he seems to have a tremendously limited range.  And it’s getting tiring.

What interested me in the movie more than anything were:
1. Edgar Wright.  After Spaced, Shaun of the Dead and Hot Fuzz?  I was more than willing to give this a chance.

2. The concept.  Taking the typical Guy pursues girl rom-com theme and making the thing that needs to be overcome evil exes with superpowers who have formed a league to fight whomever tries to date the girl?  Just oddball enough to work for me.

So…here is my thoughts on the movie…

The first thing that caught my eye was the Universal logo.   It is rendered in 8 bit graphics, and the the Universal Theme is created using digital game sounds.  And I confess, it was charming.

We are quickly introduced to Scott (via an announcer) who is in a band (Called Sex Ba-Bomb).  Instantly we find this is a world where the word “ring” appears when phones ring, lightning bolts emanate from bands as they play and when you sock someone in the face-words like “smash” appear.  Plus, people get little introductory tags to let you know who they are. 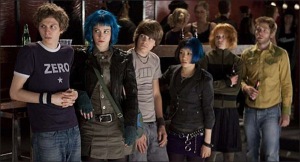 Scott is a bit (okay…a lot) self absorbed.  He is in a band with friends (including ex Kim-who seems angry and bitter towards Scott-though Scott is oblivious to it).  He lives in a tiny studio apartment and shares a bed -a mattress really) with his gay room mate Wallace Wells (a scene stealing Kiernan Culkin).

He was devastated by a breakup a year prior (His ex-girlfriend is in a competing rock band), and is now dating a high school girl named Knives Chau.  This is a bit of controversy among his friends and family, but no worries, for Scott discovers Romona Flowers (when she roller skates through his dreams).

Soon, Pilgrim discovers that Ramona has a bit of history-seven “evil Exes”…whom Scott must face in battle and defeat if he hopes to win Ramona’s heart.  This plot point has been a bit misread, as if the film is endorsing the attitude that a man must fight for a woman like a prize to be won.  The film definitely shows Scott buying into the attitude, but it is part of his early establishment as a selfish jackass.  Mind you, the ads have little nuance, so I certainly do not blame the people have had the impression that I consider a bit mistaken or inaccurate.

Really, the film tells the story of Scott becoming open to what a jackass he has been.  He challenges Ramona on how she treated her exes that would drive them to this.  Again, Scott is blind to his own faults, the women he has hurt (including band mate Kim and Knives).  This is what the film ultimately is about, Scott has a lesson to learn-and it is not about how win a shiny prize, but how to see he has to look outside himself… how to become aware of both self as he really is and aware of the people around him (and how to grow up).

Visually, this is a feast of a world.  Little icons pop up on screen like a video game, there are comic book like transitions.  In defeat, the evil exes burst into coins.  Music becomes dragons and monsters.  And it just happens.  I found myself totally liking this crazy world.

The characters are probably the big flaw as they are kind of thin.  They are more sketches, though I still found them all likable.  The Evil Exes are all well played (I found both Chris Evans and Brandon Routh-Vegan Powered Todd- totally stole their scenes).  As thin as the characters are, everybody makes them stand-Knives is adorable and Wallace Wells is tremendous fun.

Overall, I had a great time and recommend the movie.  The audience I saw it with was engaged and laughing at the right times.  I felt like Edgar Wright has shown himself a clever visionary director.  The box office has been unkind in spite of overall strong reviews.  I suspect, in the end this is a “You enjoy it or you loathe it” type of film.  I fall into the “enjoy camp”.